This is particularly important with ammunition for rifles. While it may be cheaper to use lower-quality ammo down at the range, this is not the best way to sight in or practice with your rifle. The smallest differences in ammunition can have a great effect on the point of impact at even 100m. Remember, always sight your rifle in and practice with the same ammunition you’ll be using in the field. It can be the difference between a clean kill and a wounded animal lost in the bush.

2. Don’t let the sparkle of a new rifle ruin your hunt

If you’re out hunting waterfowl and the birds are flaring away suddenly for no apparent reason it may be the glare from your barrel. The same can happen when you’re out hunting bigger game animals like deer. Don’t let all the money you spent on scent control and technical Camo patterns go to waste over such a simple issue.

You can easily take care of this problem by using some matte black/camo tape over the barrel, like this one.

For the ladies, this point also applies to jewellery. Remember that your beautiful sparkly earrings, bracelets and necklaces might look nice but they’ll also catch the eye of the animals you’re hunting. Jess and I make an effort to leave the shiny stuff at home so that we can achieve ninja hiding expert level while out in the field.

If you are trying to approach waterfowl in the reeds in a farm area where there are cows nearby, try walking more like a cow. It might sound silly but the ducks will tolerate cows a lot more than they will tolerate humans. Let out a little moo every now and then while you are walking through the reeds 😉

4. Take your shoes off

This one could be an Aussie thing – we just don’t like shoes that much! But, in all reality, it’s also a common practice for bow hunters wanting to stalk in the last few hundred yards undetected. By taking off those expensive boots you bought, and sneaking around in your socks instead, you’ll actually find it easier to sneak through crunchy leaves or noisy undergrowth, as it provides a little bit of cushioning needed to dampen the sound of the crunching leaves.

Did you know that wearing your boots too tight can cause cold feet? Honestly, I didn’t. If you are hunting in colder weather, make sure you leave a little bit of ‘wiggle room’ when you’re doing up that boot.

Leaving a little bit of room in there allows for the air and blood to circulate around your feet. This keeps them nice and toasty warm.

While we try to be as quiet as possible when stalking up on an animal, we are only human. No matter how hard you try, you’re pretty much going to be the loudest, clumsiest, most obvious creature in the field. Honestly, I’ve watched giraffe move through the thick African bushveld with more grace and stealth than a human can manage while walking on flat, open ground. We just aren’t that sneaky.

If you do manage to stuff up and make a loud noise by stepping on a particularly dry patch of leaves or on the one twig in the whole forest (which you inevitably will), stop. Don’t move. Stay as still as possible. You may have given away your position but that doesn’t mean the hunt is over. Animals are generally a lot more tolerant of noise than they are of smell. They will take off at the first whiff of something strange but they might wait around for a second or third sound before spooking.

Remember, the bush is a noisy place and you are not the only thing who ever stepped on a crunchy leaf or snapped a twig underfoot. If you just stand still (and they can’t smell you), there is a good chance they’ll go back to what they were doing.

Again, this one may sound silly but it can actually work. This is especially useful if you are hunting in an area where there are plenty of squirrels. Take quick sprints of about 10-20 yards, sprint, stop and do it again. Keep your footsteps light and your sprints quick. You will sound like a squirrel scrambling through the leaves. Either that, or you’ll give your hunting buddy a good laugh!

I’m sure you’ve seen it on your favourite hunting show. The hunter walks up to the freshly shot deer, rifle in hand, and gives it a quick poke in the eye with the end of the barrel. I’ll be honest – I’ve done this one myself.

But, think about this for a second. The standard barrel on a hunting rifle is 22-24 inches. That is not a lot of distance between you and the animal if it decides it’s got one last burst of energy in it. This doesn’t just apply to wounded animals but also to clean kills where the nerves are still firing inside the animal’s body.

If that animal gets back up and comes toward you, you’re going to want the chance to react with a follow up shot (if necessary). I can tell you right now, you’d want to be pretty quick if you’re only going to give yourself 22 inches of reaction time. Animals are fast. Especially wounded ones.

A much safer course of action starts with patience. There is no need to get to your animal in record time. Give it some space. Let it go into the light in peace and give those last few nerves a chance to fire off while you’re at a safe distance. Some guidelines:

So you’ve shot an animal and it hasn’t gone down as quickly as you would’ve hoped. It happens, unfortunately. You’ve also remembered to be patient (see tip number 8). Now it’s time to go looking.

While you might think that the ground is the best place to find a blood trail, don’t focus there alone. Pay attention to tall grass stalks which may have brushed against the wound or been trampled on. You can also look for broken branches on smaller trees and shrubs that could indicate the animal’s direction of travel.

Alternatively, if you can’t find any sign at all, conduct a grid search extending 100-200m in all four directions around the last place you had eyes on the animal. 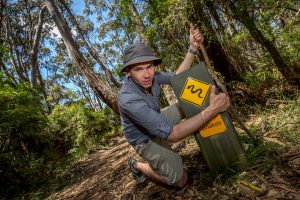 The biggest danger to Australian hunters is not the gun, but wildlife. In this article, we look at four of the deadliest threats to hunters, and see that small sometimes packs the biggest punch. 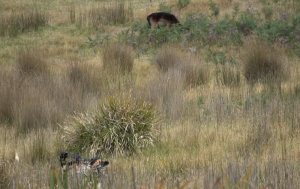 9 Steps to Becoming a Master Stalker

Being able to spot and stalk an animal in the wild is an important part of learning how to hunt.

One thought on “Unusual hunting tips”